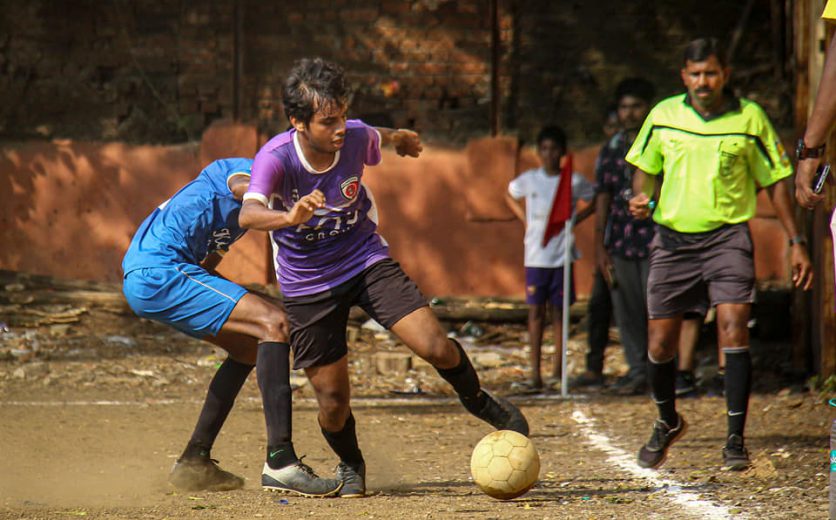 On Match day 6, FC Kolovery played two games winning both to qualify for the last four. In the early morning encounter FC Kolovery overcame KVB (B) with a comfortable 2-0 win before securing their 2nd win of the day beating Kalina United 2-1. In both the games, it was Bhomeet Vakharia and Aniket Kumar, who were on target to secure FC Kolovery win.

In the second game of the day, Mohammed Shafiq Khan’s brace for team Kalina Rangers was not enough as defending champions Air India Colony Boys rode on goals from Kunal Kunchikorve, Sachin Medar, and Astle Pereira to take all three points from the game.

In the next encounter, Tyson Pereira starred with an hat-trick as Indian FC secured a big 7-0 win over Egyptian Boys to keep their semifinal hopes alive, with just a point separating them against fourth placed Kalina Village Boys (A). The latter suffered a disappointing 1-2 loss to tournament favorites Air India Colony Boys in the evening encounter of the day. Kalina Village Boys ‘A’ are still placed on 4th position at KFL league standings with 11 points and need a win in their final league game to keep their KFL semi-finals’ hopes alive.

Meanwhile, Kalina Village Boys (B) registered their first win of the campaign after Faizan Shaikh’s strike gave the team a 1-0 win over FC Kolovery (Z3) and their first points of the tournament.

Also Read: It’s going to be a perfect stage for us to get our first win in the campaign: Manvir Singh

Coach Igor Stimac to try as many players as possible against NEUFC
SAFF U-15 Women’s Championship: India are set to take on Nepal in tournament opener