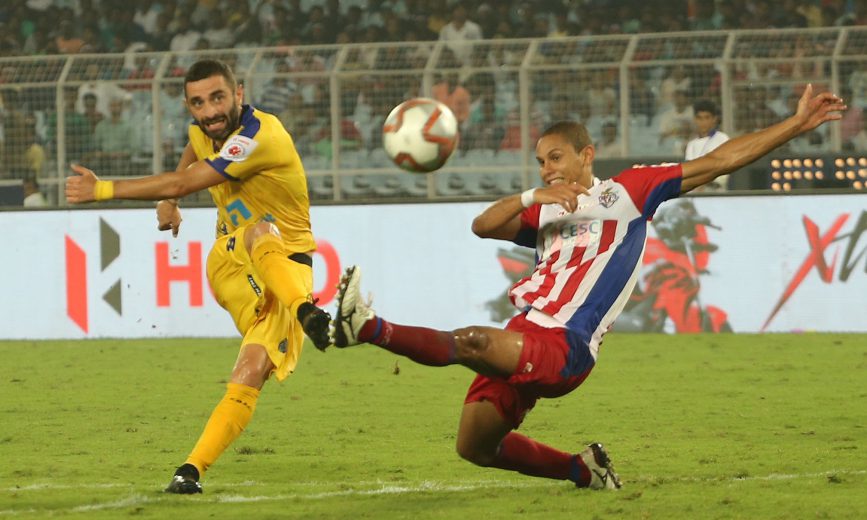 The teams were locked goalless in the first 45 minutes but second half goals from Matej Poplatnik (77th) and Slaviša Stojanović (86th) made the difference.

It were Kerala who started the match on the front foot with Poplatnik coming close with a header as early as the fourth minute, following a delicious cross from left-back Lalruatthara. Five minutes later, the Slovenian forward was in the forefront again following another cross from Lalruatthara but his rasping shot was blocked well by Gerson Vieira.

In the 11th minute, Lakic-Pesic’s inch-perfect header from a Poplatnik corner was cleared brilliantly off the goal-line by Sena Ralte. ATK’s first threat came through Lanzarote’s corner which curled in and hit the top of the crossbar before going out of play.

Everton Santos then came mighty close to giving ATK a surprise lead in the 26th minute as his pile-driver of a shot from outside the box sailed inches above the crossbar.

ATK custodian Arindam Bhattacharya was then called to make a fine save from a well-placed shot by Abdul Samad. It was the hosts who had the perfect opportunity to take the lead in the dying minutes of the first-half when Jayesh Rane found himself unmarked in the box but the midfielder failed to find the target from El Maimouni’s corner despite having the entire goal at his mercy.

Kerala coach David James threw on Courage Pekuson in place of Abdul Samad after the interval as a cagey 15 minutes or so ensued. Seiminlen Doungel had the best chance during that period after being released behind the ATK defence but the winger’s scuffed shot failed to trouble Bhattacharya.

A set-piece taken by Poplatnik in the 65th minute saw Jhingan bare down on ATK’s goal but the defender’s header sailed just wide of the target. James then brought on CK Vineeth for Doungel as his second throw of the dice as Steve Coppell made a double change at the other end with Kalu Uche and Eugeneson Lyngdoh coming on for Balwant and El Maimouni respectively.

The deadlock was finally broken in the 78th minute by the lively Poplatnik who cushioned a perfect header beyond Bhattacharya after Stojanovic’s blocked shot looped above the ATK defence.

Kerala wrapped up three points in the 86th minute, thanks to Stojanovic’s thunderous strike from outside the box. The visitors then held on to preserve their two-goal lead in the dying minutes to get their 2018-19 campaign off to a perfect start.

Korea Republic are the favorites but we will fight: India U-16 coach
WCG Rink Football: Holy Cross score over St. James