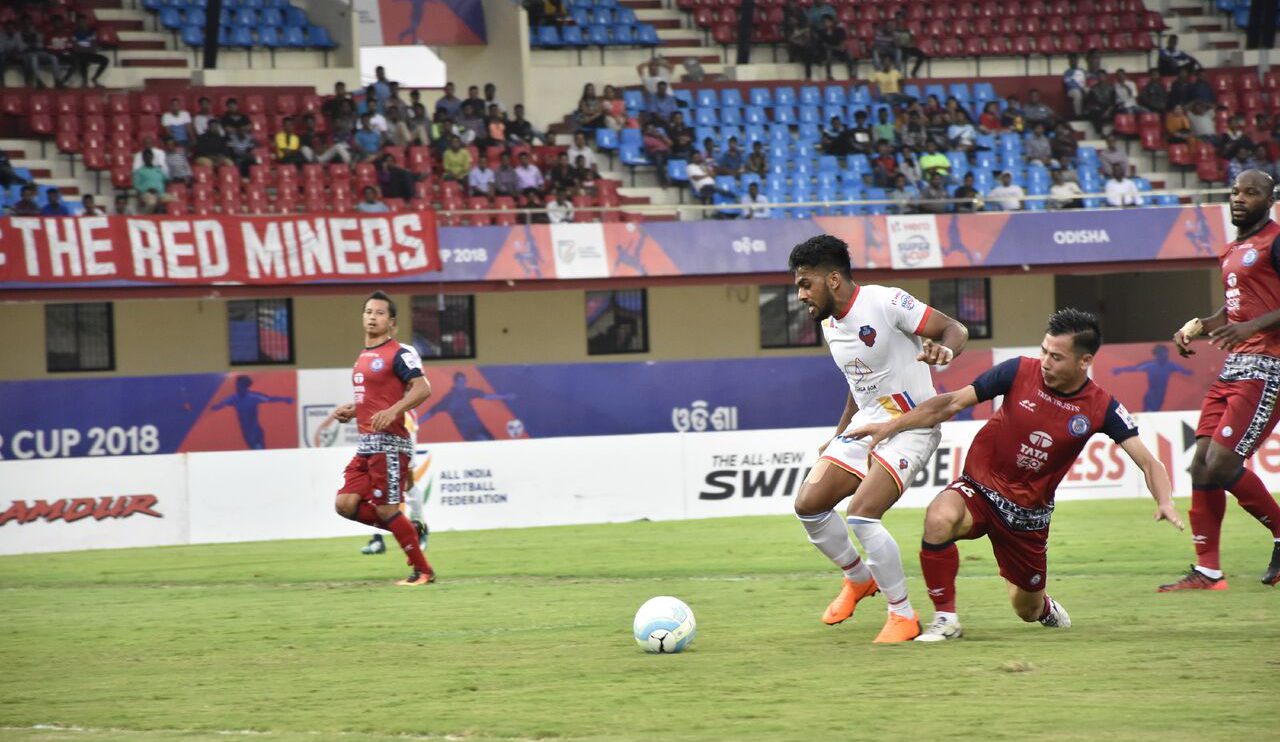 A half – time brawl over a controversially disallowed goal between staffs and players of both sides meant referees showing Red cards to 6 players while few coaching staffs too were given marching orders. 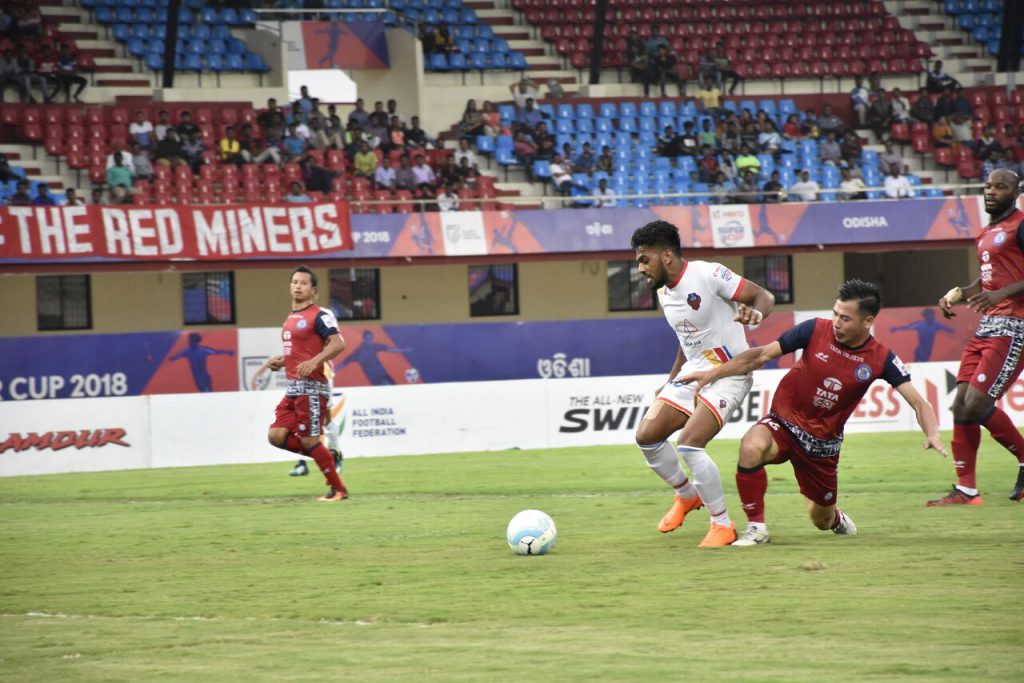 The Goan outfit now face Kingfisher East Bengal FC in the Semi-finals on 16th April 2018 at the Kalinga Stadium, Bhubaneswar. Brandon Fernandes (34’), Ferran Corominas (P – 69’), Manvir Singh (77’), HugoBoumous (78’; 89’) scored the goals for FC Goa while it was Ashim Biswas who scored the lone consolation goal for Jamshedpur FC (90 + 2’) in the game. Frenchman Hugo Boumous of FC Goa was adjudged the Hero of the Match.

The first half of the game began with FC Goa taking the lead with the attacks. The Goan outfit made continuous moves but a solid defence coupled with good goalkeeping from the experienced Subrata Paul of Jamshedpur FC kept FC Goa out of the fray for a lead.

Jamshedpur FC made a few moves thereafter, with the closest chance coming their way in the 11th minute through Haitian Kervens Belfort, but a very attentive Laxmikant Kattimani made a brilliant move forward to save a goal that could have given the Jharkhand outfit a crucial lead in the game. The game thereafter was a mix of both attack and a lot of midfield play without any advantage to either side.

It was Brandon Fernandes of FC Goa who drew first blood in the game when he made a fine run from about 40 yards from the goal from between two Jamshedpur FC defenders to make a fine chip beating the experienced Subrata Paul and finally give his team a very deserved 1-0 lead in the 34th minute.

Soon after, Jamshedpur FC had a chance to equalize through Belfort who failed to find the back of the net. Six minutes later in the stoppage time a brilliant pass from Brandon Fernandes of FC Goa to his Spanish teammate Ferran Corominas couldn’t be converted both due to a poor touch from the Spanish and a good save from Subrata Paul. The first half came to an end with FC Goa leading by a goal in the game.

Also read: Neroca ready to fight till the end against ‘Consistent’ Blues 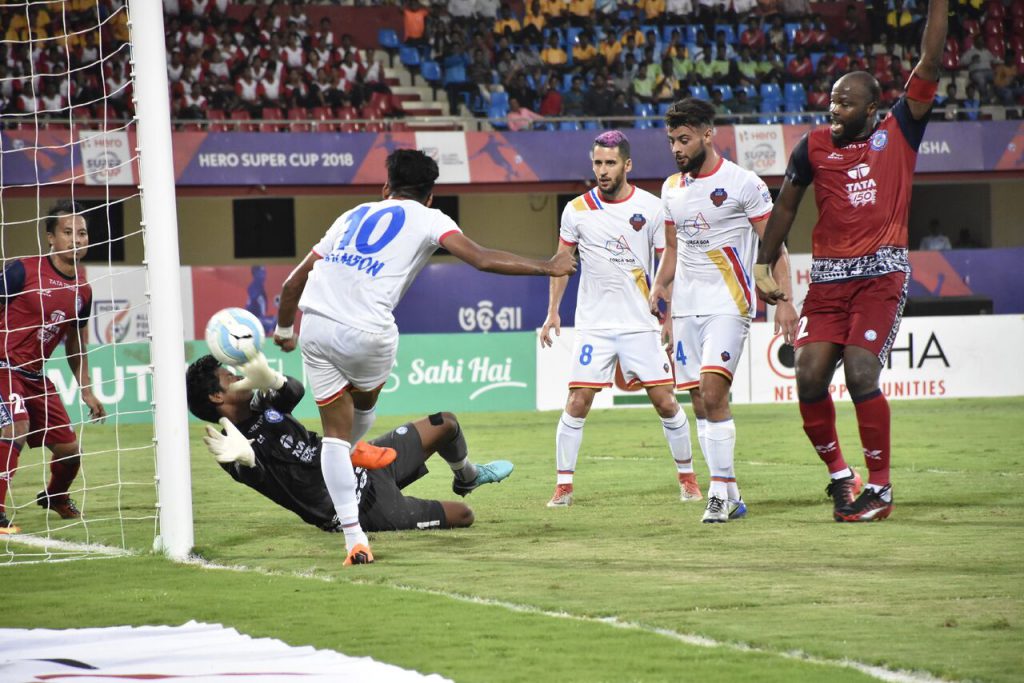 Controversial moment: Brandon slots one home which was later denied by the referees as the ball had gone outside the line

The second half began with eight players taking the field from either side, after a brawl that broke between both the teams at the end of the first half. The referee sent off six players (3 from each side) from the field of play. Subrata Paul, Haitian Kervens Belfort, Anas Edathodika from Jamshedpur FC and Brandon Fernandes, Spanish duo of Bruno Pinheiro & Sergio Marin from FC Goa were sent off on the red card.

FC Goa was clearly the dominating side in the second half consistently making it to the Jamshedpur FC box. FC Goa, who were consistently attacking all throughout couldn’t really capitalize on their lead until a reckless tackle by Jamshedpur FC’s Brazilian midfielder Emerson Moura on Ferran Coromino led to a penalty to the Goan side. Ferran (68’) made no mistakes in converting the same giving his team a 2-0 lead in the game.

Thereafter FC Goa played with ease striking twice in a span of two minutes through Manvir Singh (77’) and French Hugo Boumos (78’) giving a comfortable lead of 4-0 to his team. The French midfielder scored again in the 89th minute giving FC Goa a huge 5-0 lead in the game. Jamshedpur FC finally found a consolation through a goal from Ashim Biswas  (90 + 2’) in the stoppage time.  The game finished with FC Goa making it to the semi-finals comfortably defeating Jamshedpur FC 5-1.