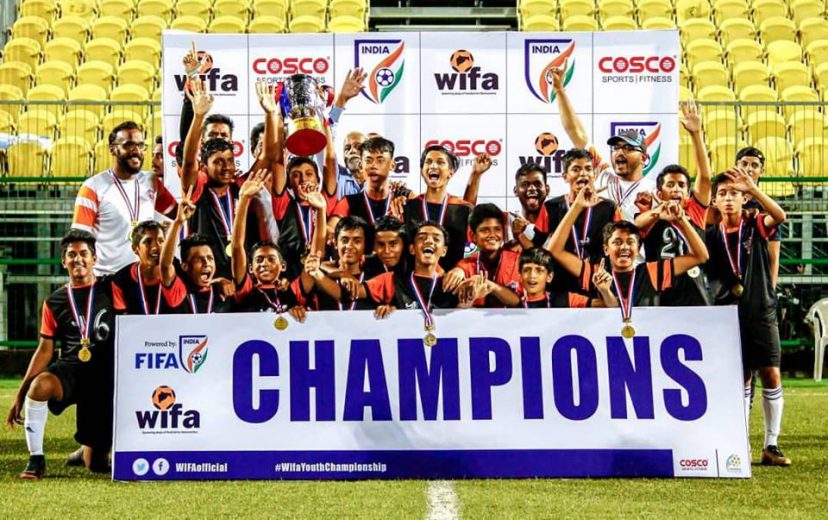 30th August 2018, Mumbai: A late strike by Dinesh Singh proved enough for FC Pune City as they registered a hard-fought 1-0 win over Defending Champions KMP XI in a mouth-watering WIFA Youth Championship U-14 final at the Cooperage Stadium on Thursday evening. This was the first time FC Pune City participated in the WIFA Youth Championship as they were not a part of the same in the first edition last season.

Nonetheless, KMP (Keshav Madhav Pratishtan) XI gave a good fight, right until the final whistle. They almost scored an equalizer in the injury time when a free-kick effort rattled the bar. Winning the inaugural edition last time around, a runners-up medal has surely cemented KMP’s name into the history books.

It was in the 49th minute when FC Pune City’s Dinesh Singh scored a sublime left-footed goal which broke the deadlock. The goal gave FC Pune City a huge boost in their quest to lift the WIFA Youth Championship title. KMP XI’s Samuel Selvadas and Mustafa Shaikh were man-marked brilliantly which put a halt to KMP’s attack.

Franklin Nazareth and Dinesh Singh were tremendous throughout the game. The duo kept their composure and guided the rest of their teammates in the dying minutes to round-off a brilliant campaign. Their Captain Franklin Nazareth won the ‘Best Player of the Tournament’ while Kenkre FC’s Dexter Fernandes was awarded the ‘Golden Boot’ after netting 11 goals in the Championship.

FC Goa start their pre-season campaign with a 3-0 win over Spanish side Deportiva Minera
Farukh, Manvir score brace as India wraps Australia tour with a 4-0 win over Rydalmere Lions