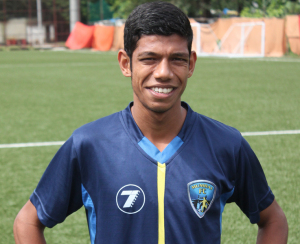 How influential have Khalid Jamil and Henry Picardo been to help you grow as a player?
I have known Khalid Jamil since the time I was at Mahindra United. There he could only recognize me by my face and not by my name. Later on when I became a part of the Mumbai FC u19, he was my coach and it has been a long journey since then. His passion for football is never ending. At training, he is always before time and his positive approach helps his players grow a lot.

Henry Picardo is a very helpful person. He is more like a teammate rather than a manager to us. His jovial attitude and the way he bonds with players, especially the newer players, is something to lookout for.

What has been your biggest achievement in your career?
Playing for Mumbai FC in the I-League ofcourse. It has been a wonderful journey. I see a really bright future here. Ask me the same question again next year.

You have been out of footballing action for almost a year now. How eager are you to be back playing matches for the club?
Oh, very eager! I was very disappointed to have an ACL injury. It kept me out for a very long time. I was advised complete rest but whenever I used to watch the team play, I would just feel like getting off my couch or from wherever I am watching the match and go play.

I am completely fit now and I feel good in training. I am back stronger than ever.

Do you have any pre-match routine?
I don’t really have a routine per se. After the team sheet is out I just try to imagine myself playing the match. That and I sometimes listen to music. I feel it’s best to keep things simple before going out to play a match.

And what kind of music do you listen to?
I like to listen Slow and House music.  It helps me focus and control my nervousness, if any.

Who are the funniest players in the squad?
Dane Pereira and Collin Abranches. They are forever smiling and make people around them laugh.