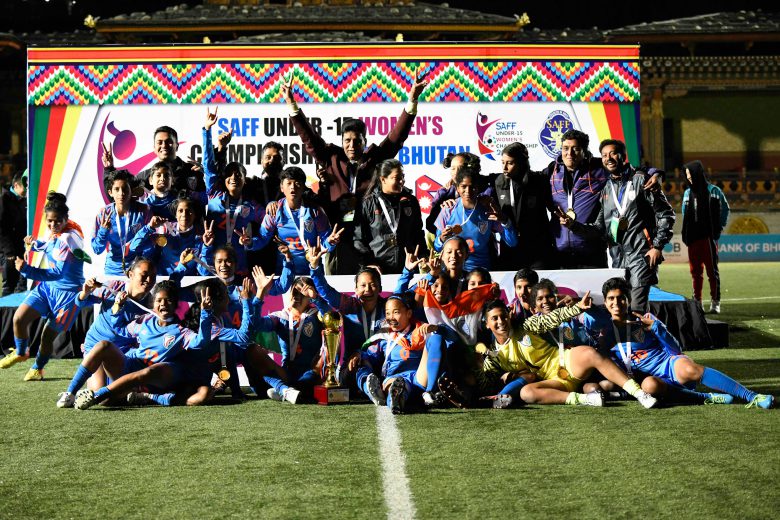 India emerged champions of the SAFF U-15 Women’s Championship 2019 at the Chalimithang Stadium in Thimphu, Bhutan, on Tuesday, October 2019, defeating Bangladesh 5-3 on penalties after the match ended 0-0 post 90 minutes.

It was a feisty start to the game as India looked to take the early initiative. Priyanka Sujeesh orchestrated the attacks from the middle of the park, while Amisha Baxla looked lively from the right flank.

Bangladesh, however, also looked to hit India on the counter, and they almost had the perfect chance when forward Sapna Rani was played through behind the India defence with only goalkeeper Adrija Sarkhel to beat. The latter rushed out of her line to clear the chance.

Amisha Baxla and Lynda Kom Serto combined to create a couple of chances, but the Bangladesh keeper foiled the chances. India also had a penalty shout, which was turned down by the referee, after a cross from the right appeared to have struck a Bangladesh hand.

Bangladesh came out with more initiative in the second half, as their midfield worked hard to close down the India attackers. Head coach Alex Ambrose soon brought on Sunita Munda in place of Amisha, and the former immediately had a chance as she was put through on goal by Priyanka. However, Bangladesh keeper Rupna Chakma stood firm and snuffed out the chance.

Sunita looked lively down the right for India for the remainder of the match but it ended with the two teams deadlocked. Goalkeeper Adrija Sarkhel stepped up in the dreaded penalties to save Bangladesh’s first spot-kick, as India went on to win it 5-3 on penalties, as captain Shilky Devi slotted in the last spot-kick.

FIFA World Cup Qualifiers 2022: “We couldn’t deliver the performance to match the atmosphere at the VYBK” says Sunil Chhetri
MDFA Elite side Kenkre Football Club to host trials for 2019-20 Season